The margaritas were unseasonably cold as we relaxed at the cantina overlooking the beaches we had grown so fondly of the previous 4 days.  This Tequila assisted power session was not too unlike our first evening, where conversations about life were frequently interrupted by locations, tactics and strategy to bring “The Man” to hand. 5 days, 2 Ten weights, forgotten stamina, and a ridiculous number of flies later, the stage was set.

We came in search of Roosterfish, as most do in the East Cape, and being April knew we could be early to the dance, and were most likely going to be working with marginal numbers of small to medium sized fish. The factor that was in our favor this Spring however, was the weather, 90 degrees and calm had warmed the Cape early. As well, the word was bait in the form of Sardinas were available in good numbers. Although we had a guide booked later in the week, Our first few days would require us to take everything going on and transform it into success on our own, off the beach.

As we set off  the first morning we felt that we had two choices, cover real estate or find bait. We did both.

What we would find that morning would set the tone for the rest of the trip. Although we spotted a couple of fish far beyond casting distance while walking, it was a sandy stretch 100 yards long and bordered rock reefs that would show us that we could fish smarter. Walking with anticipation, our eyes naturally fixated on the first 100 yards of water from the beach. What made this stretch different was the amount of nervous water suspended over the sand bottom. As we got closer, the nervous water transformed into thousands of Sardina jumping away from us beyond the beach break. Obviously seeing this got us “Birdy” quick and we decided to camp on separate sides of the school taking a much needed break from walking in the Mexican heat. Shortly after sitting, the Sardinas settled down and we were afforded the opportunity to watch the bait in it’s own environment. What we thought could take hours, produced in just minutes as the bait fish corralled and sporadically jumped towards the beach. We looked around the margins for the bullying perpetrators, and from my side, saw a pair of dark shapes closing in towards the beach and their cornered prey. The cluster that is preparing for a 60 ft shot at an incoming rooster while on the beach, cannot be put to print without bad language. Thankfully I had the new Sage Salt, (In my opinion the Finest rod created for in-shore fishing) which really does make me a better caster, just not this time as my fly landed on top of the pair instead of in front of them. Quickly reloading, I took the next shot at 40 ft and was immediately rewarded with a crashing take on the surface, but missed the set. It was then that I saw my brother cast, then set into the first of 14 Roosters we would collectively catch from the sand over the next few days. We would add 5 more from the guides boats the last two days putting the tally at 19. What makes this tale of success different from many is that we caught these fish in 3 separate, well defined areas that shared the same common denominator: Bait.

Not always so quick

Finding and landing your first Rooster is a special deal, and after my brother landed his 15 lb “Free Range” beauty, we decided to see if this was a one time opportunity that we had cashed in on. Although more scattered from the fight , the Sardinas were still outside of us, but less concentrated. So we waited, the Sardinas crept back in towards the break and we repeated the scenario with fish that were charged up, expecting to eat live Sardinas. In previous years we simply looked for Roosters within casting range, and got lots of exercise in the process. This felt like cheating, but now we had developed a separate problem in passing the time between Rooster attacks. Day 2 on, would see us bringing our 10’s along with a smaller rod for “passing Time” constructively. In doing so, we exposed the staggering number of Cabrilla, Pargo, and Triggers that would aggressively eat Crab and Shrimp imitations presented near the bottom. Bunny Gotcha’s were particularly effective. Our largest Cabrilla was a mere 4 pounds, but on a 6 weight provided plenty of giggles and sport. Triggerfish were sight fished, often within 10 feet and as Roosters seemed to come in successive waves, provided excellent sport on lighter line weights between opportunities. 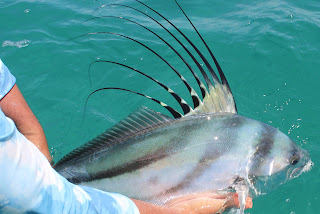 Our final days in Baja found us aboard a 22′ Panga with local guide Roberto. He suggested we look for Dorado in the morning followed by an afternoon Rooster run. We headed North towards La Paz to secure bait (Live Sardinas), and then to some suspect shark buoys allegedly holding Dorado. This early in the season the Maui ran small, we’ll call them Taco sized, but what they lacked in weight they made up in sheer aggressiveness. Fishing was classic “bait and switch”, semi mindless, but a hell of alot of fun, casting to beautifully charged up Dorado. After filling our dinner menu for the rest of our stay, we chased Roosters along the inshore. A fish would be spotted, charged up with live Sardinas and cast to. In turn without much hesitation, the Roosters would crush our Sardina imitations, making us feel like we tied the worlds best pattern. Again, not a complex riddle to solve or cast to make, just good plain ol’ fist-fighting at it’s best. After walking and fishing off the beach the previous three days in Sahara like heat, boat fishing was exactly what the Dr. ordered. We found these fish to run larger (up to 30#) and farther from the beach, but ironically caught 4 out of 5 in areas we had seen concentrations of bait. Coincidence? Sure could be- I’ll let you know after I get back from a few more trips. 🙂

One final note about Baja is on the diversity and the opportunity to catch a large number of species.  I have already mentioned the Cabria, Pargo, and Triggers that you can fish for while the Rooster fishing is slow, but we have also found Jacks (some really big ones), African Pompano, Bluefin Trevally, and much more.  There is always something to cast at, ensuring even slow Rooster days are filled with good action on the fly.